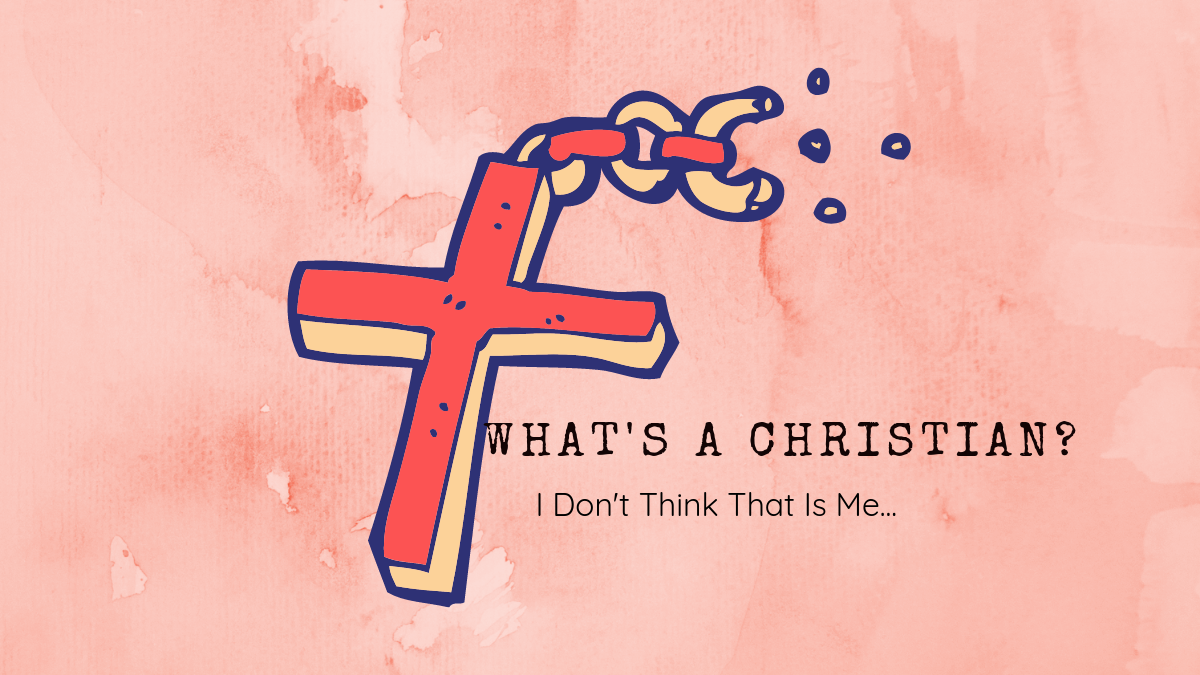 Recently I have been thinking about the title “Christian”… what is it exactly?

Well these don’t say much to me so what is “Christianity”?

Christianity
Noun – the religion based on the person and teachings of Jesus of Nazareth, or its beliefs and practices.

So here is the thing…I don’t like the titles.  I used to not like leadership but we will dive into that later maybe… but back to the titles. Behind every title is an imperfect human being and titles always gives a person some sort of unspoken power but it also gives people around you a reason to judge you if you make one move in being a human with the title.

Disclaimer:  Everything that I am speaking about I have done so I am just as imperfect as the next human being.  I can speak on it because I have been on both sides of the table.

Alright back to it… I often wonder why people are so quick to take on titles and I after years of watching people and even looking back over my experience with my own titles I came up with my OWN conclusions but you also hear this around the world as well.  But titles give people a false sense of power, entitlement, and status and no matter how false it is it seems so very real to us in our heads.  We take the title and run with it.  At one point in my life I really hated yep hate is a very strong word but I really hated leadership, the term leadership and all things representing leadership.  I honestly wasn’t seeing what I felt like at the time good leadership.  All that I saw at the time were a lot of selfish people going for what they wanted no matter who they hurt or stepped on to get it.

So when I think about the title “Christian” I think of a lot of judgmental people who interpret God’s words and Jesus’ teachings to fit their already messed up way of thinking.  I often watch as people claim to be a Christian and in the same breath be super unchristian like.  I recently sent a text to my friends and was like “I don’t like Christian Christians”.  I was like “Christian Christians” are those people who feel like they do NOOOO wrong but the person next to them well everything that they are doing is wrong and they are going to hell no matter what they do.  Now I know that this probably sounds very judgmental of me also but I promise that I am not judging anyone and this story has a super point.

More than anything a title means nothing it holds no weight when it comes to Jesus because he sees you and only you not the fluff that you are trying to surround yourself with.  I’ve found myself these days not claiming to be a Christian but claiming to love Jesus and doing the best that I can at following His directions.  Babeeeeee I am so far from perfect I often wonder if anything good that I think that I am doing will allow me a small spot in Heaven.  I do my best to not judge those around me but I still fall at times especially when someone says “I’m a Christian I would not do that”.  That statement is the quickest way for you to get me away from you quick fast and in a hurry.  It almost seems like when we take on the title “Christian” we are saying that we are no longer sinners and we can do no wrong because we have this title now.  The Bible says that we have all sinned and fallen short of His glory (Romans 3:23) and that doesn’t just stop because we are now Christians.  If anything the struggle to do right and to be right becomes harder because the tests are rolling in and we are now suppose to have an extra sense of right and wrong and lean more to the right side of things.  But the wrong side of things always seem to present a better, faster outcome for us.  In the moments of weakness we are suppose to rise to the title of Christian and always choose the right way to do things even if we aren’t sure of the right thing.

I recently found myself judging someone so near and dear to my heart because of what I thought was going on and because of the same similarities of a previous situation with this person and I had to be corrected.  You never know what a person is going through underneath the smile and we have to be careful not to jump on them for being their human selves.  I am not going to always get it right there are going to be days when I give someone the side eye because I feel like they are doing it all wrong while being in the position that they are in.  God is definitely still working on me. But what I will continue to do is challenge myself to be myself no matter the title that I have or that others place on me.  As a person alone I know that I have to be kind, caring, compassionate, corrective with love and so many other things to those that I come into contact with.  But I will do my best to not be judgmental but loving and understanding.  I won’t be quick to dismiss but open to embrace.  I will be slow to speak and always listen.  I will be an imperfect human that will not always get it right but will get up trying every day of my life.

If we are to be followers of Jesus I plead with you to be more of a lead by example and not by title follower.  Let people see you through your works and actions because at the end of the day that is what shines greatest in the eyes of others.  People will always remember how you treat them and make them feel.  Allow them to see the human side of you that chooses to love and do the right thing without harming others.  You won’t always get it right but don’t judge yourself or allow others to condemn you for making a mistake because we all will do make them.

Throw your titles away and just be the person that God has called you to be and the ultimate calling is to serve others and bring others closer to Him.  Let’s do it people!!!!